Ok, so today's dish was actually made for Thanksgiving dinner on Thursday, but nonetheless, Princess chose the recipe, and she made it.  She also learned a valuable life lesson.

We started with Stephanie O'Dea's More Make It Fast, Cook It Slow recipe for Stuffing with Apple and Sausage on page 236.  It reminded us of a recipe that we all love, Rachael Ray's Apple and Onion Stuffin Muffins, except that Stephanie added pork sausage

Here's a photo of Princess measuring out the bread cubes. 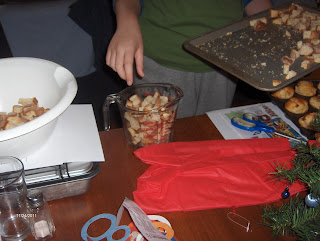 And here's a photo of Princess adding the celery she chopped. 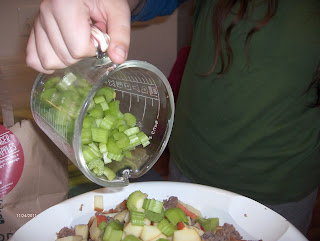 See the apple pieces in the big bowl?  She did all the chopping herself, even the onion.  She even figured out that she could use Hubby's safety goggles from the garage to eliminate the onion fumes from hurting her eyes.  She stirred everything together in Big Red, and we turned it to high.
After 3 hours, the bottom was "overbrowning" and the top was soggy.  This is not stuffing, at least the way I like it.  Stephanie's recipe says to cook it til the top and sides have browned.  So, we turned Big Red down to low and waited.  And waited.  And waited.  After about 8 hours, the bottom 2 inches were well over done, and the top was still soggy.  Like mushy soggy.
So, the valuable kitchen lesson here is that sometimes things in the kitchen don't work out.  This is an especially valuable lesson for her - usually when I try a new recipe, she's the first one to criticize.  And usually in a less-than-pleasant way.  Now the shoe is on the other foot.
At least she got practice chopping...
Presented with love by SPH at 9:00 AM