Happy Cinco de Mayo!  Here's a  delicious recipe for an authentic Mexican  drink - like rice pudding in a glass...
So a while back I totally had a taste for Agua de Horchata.  It's a Mexican rice drink that really does taste like rice pudding in a glass.  Well, that sent me scurrying all over the net, reading recipe after recipe, until I came across this one.  And the second best part, with flavor being first, is that it is totally GLUTEN FREE!!!

Here's what I came up with: 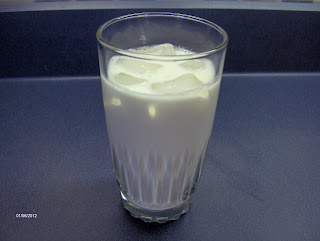 SPH Agua de Horchata
2 cups long grain white rice (the kind you actually have to cook longer than 5 minutes)
3 cups boiling water
1 vanilla bean, split and scraped
1 t. vanilla extract (more or less to taste - I use a whole tablespoon)
1/2 t. cinnamon (also more or less to taste)
1/3 cup sugar (again the more or less to taste thing)
4 cups milk or water (your choice - I only had half and half in the house, so that's what I used)

Put the rice in a quart size jar.  Add vanilla bean and seeds.  Cover with boiling water, filling jar all the way to the tippy top.  You may have a few tablespoons of water left in your measuring cup, but that's ok.  Put on a lid and a ring. 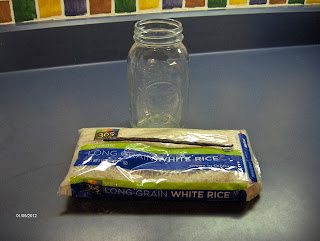 Allow to sit overnight.  After a nice long soak, remove (and discard) vanilla bean from jar and add the rice, soaking water, vanilla extract and cinnamon to a blender.  Puree until smooth. 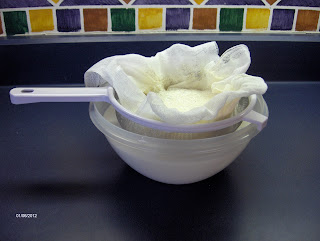 Drain through a cheesecloth lined sieve into a medium-sized mixing bowl.  You will have to moosh the rice around in the cloth with a large spoon to really get every last bit of goodness.  In fact, when you think you've really gotten it all, wrap the cheesecloth up into a bundle around the rice, and SQUEEZE IT.  Squeeze it hard, like you're mad at someone.  Like they ate all your chocolate mad.  Pour the "milk" from the bowl back into the blender, and add sugar and milk/water, and blend again until well combined.  Serve chilled, even over ice if desired.

Agua de Horchata is so refreshing on a hot summer's day.  It has such simple flavors, but wow!  If you are feeling extravagant, spring for Mexican vanilla and Mexican cinnamon.  You can order the vanilla online through eBay for a really decent price.  Set aside some of the beans, and use some to make homemade vanilla extract.

Also, if you opt for the dairy free version, it would make a great base for a smoothie.  Make it even healthier by swapping in honey or agave for the sugar.  After draining the rice milk in the sieve and putting it back in the blender, throw in some frozen berries or other fruit.  Oh, so good!

I wonder how this would be using brown rice. Thanks for the recipe! I love rice milk, so I'm eager to try this variation.

Umm! This sounds delicious. You said you had half and half on hand and used that. Did you dilute it at all?

Thanks for linking to Time Travel Thursday.

I used the half-n-half straight, without diluting it. It was almost like rice pudding ice cream - VEEERRRRY rich and creamy. Good stuff!