Our old dishwasher didn't wash dishes very well.  Like ever.  Like from Day One.  She earned the sarcastic nickname of "Princess" - not to be confused with our daughter of the same nickname.  She also earned several other nicknames which I won't share - this is a family show.

We've tolerated her idiosyncrasies for 11 years.  Yes, we are a patient and tolerant group.  About 6-8 weeks ago, Princess the Dishwasher decided that she would only sort of clean the dishes on the bottom shelf.  She would only clean dishes on the top shelf if they had been rinsed completely clean, and then the shelf could only be  half-loaded.  About 10 days-2 weeks ago, she decided that doing dishes on the bottom shelf too was too much for her delicate disposition.  Now, I'm sorry, but if I have to wash the dishes before the dishwasher will wash them, we've crossed the line.

So, Bubba (whom I'll pay later for this) was out running errands with Hubs one fine day, and he mentioned to Hubs that with my birthday, our anniversary and Christmas are just around the corner.  "Maybe you should get Mom a new dishwasher."  Like I said - I'll pay him later.

So, Goddess came to her new adopted home last night from Home Depot.  She was installed this morning by our dear friend and all around good guy, Mr. Plumber. 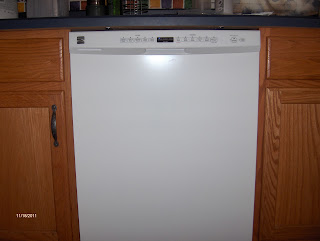 Isn't she beautiful?  Can you hear her running?  NEITHER CAN WE!  We have an open floor plan, and vaulted ceilings (aka a great room area that acts like a cave and makes even pin drops echo).  She is QUIETLY WASHING DISHES!
So the test load of dishes is inside, and we are anxiously awaiting the results.  She is currently washing a few items that Princess (now renamed HOMELESS PILE OF SHEET METAL) refused to touch yesterday, including the bowl from the pizza dough I made yesterday that had some dough bits still stuck on the side of the mixer bowl, a pan that we popped popcorn in, and bowls from the chili we had for lunch (and no I didn't rinse them).
Waiting and washing somewhat-patiently...
Presented with love by SPH at 1:35 PM

Email ThisBlogThis!Share to TwitterShare to FacebookShare to Pinterest
Labels: homemaking