The orange in these is a really surprising bright pop of flavor - you've GOT to try them! 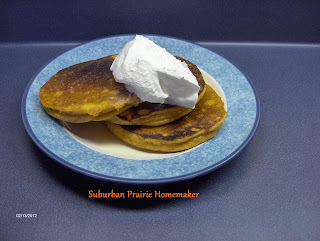 Have you been watching "Worst Cooks in America" on FoodNetwork?  We LOVE that show in my house - it's been good reinforcement for why teenage-type people in my house need to learn to cook.  We watched the season premiere, and Princess exclaimed at one point "Even I know how to separate an egg!".  Can you imagine adding a WHOLE BOTTLE of soy sauce to a stir-fry dish?! How about not being able to read a recipe?!

The bright spot of the episode was this recipe that Chef Anne Burrell's Red Team had to make for their first official challenge.

"Can we make them gluten free?"

SPH Gluten Free Pumpkin Orange Pancakes with Cinnamon Maple Syrup
1 cup Pamela's Baking Mix
1/2 cup turbinado (or brown) sugar
1/2 cup pumpkin
3/4 cup orange juice
1 teaspoon dried orange peel OR
use the juice and zest of 1 medium orange (be sure liquid = 3/4 cup, so add water if needed)
2 eggs (1 separated)
butter for griddle
1 cup maple syrup (the real stuff from trees, not the other stuff)
1-2 teaspoons of ground cinnamon (or to taste)
Whipped topping of your choice (I had Cool Whip on hand, but you can go to the link above and get a recipe for Vanilla Whipped Cream)

Combine pancake mix and sugar in a medium mixing bowl.  In a small mixing bowl, beat together pumpkin, orange juice and peel, 1 whole egg plus 1 egg yolk.  Stir wet ingredients into dry, just until mixed (it's ok if you have a few lumps, but not too many).  In your mixer, beat egg whites til just before soft peaks form. Fold egg whites gently into pumpkin batter.  Preheat griddle, and when it's at the desired temperature, add a pat of butter.  Ladle/spoon batter onto buttered griddle, and cook until first side is done (bubbles have appeared on the top and burst).  Flip, then cook another few minutes on the other side.

While your pancakes are cooking, add cinnamon to your syrup and warm over medium heat.

Serve pancakes fresh from the griddle with the syrup and whipped cream/topping.  Be ready for some OMG's.  Yes, they really are that good.

Those look delish! Who says gluten free cooking can't be yummy?! Thanks for sharing.

A whole bottle of soy sauce? Yikes. These sound great and the orange sounds like it would be a perfect little zip. Thanks so much for sharing at our Link It Up Thursday party.

Oh my goodness! These look yummy. Thank you for sharing!

These sound perfect. Love these flavors. Please share at Bacon Time if you have not already. I am drooling for breakfast now, we are having pancakes too :)

My husband has a gluten allergy, and he loves pancakes I cant wait to try this!!

I don't have to eat gluten free but these sound so good.

Hmm! Orange and pumpkin! That sounds like an interesting combo. Thanks for sharing these at Shine on Fridays!

Thanks for linking up @CountryMommaCooks…Have a wonderful Sunday:)