If you had told me that I could be out working in my garden, in December, with no winter coat on, I would have laughed. Until I was out there yesterday... 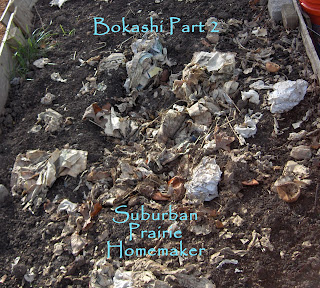 Yesterday, it was about 60 degrees here.  No kidding.  So I decided to take advantage of the relatively warm weather and repair my garden bed that had been tilled by mysterious creatures in the night.

In case you are new to this story, you can read this post about how I started my Great Bokashi Experiment.

I had buried 3 buckets so far, all of which were apparently not dug deep enough.  Even though I dug down to the bottom of this bed, and piled all the dirt back on the contents of the buckets.  Many articles and blog posts I had seen online recommended covering the area in which a bokashi bucket's contents were buried with metal mesh of some kind.  I guess I was a bit naive or lazy maybe and thought I could get away with just dirt.  Nope.

So I used what I had on hand, and followed the lasagna gardening method I use in my other garden bed.  Here's how it went...

I raked out all the chewed up leftovers into a pile near the original holes.  I then dug out all the holes deeper and wider.  I also added a fourth hole because Bucket #4 was ready to hit the dirt.  Into these holes, I returned the fermented contents to their garden graves, and covered them back up with the existing soil.  Now, because Bunny #1 is paper trained due to a disability, we had "pre-fertilized" newspapers because Princess and I just happened to have cleaned out his cage yesterday.  Those went on top of the newly re-replaced soil.  I had one bag of organic garden soil left, which then went on top of the newspapers.  The giant former canning kettle, which holds the contents of Bunny #2's litter box (aka bunny beans), was emptied onto this soil and its contents were gently raked to mix it into the soil on top of the papers.  I raked up a bunch of leaves from our yard (3 wheelbarrows full) and spread these in another layer on top of the rabbit manure/soil mixture.  I am sincerely hoping all that rabbit urine smell will deter our mystery tiller.  If I had coffee grounds on hand, I would gladly have added those as well.

Also, I rounded up all the bigger sticks and branches from our yard and our next door neighbor's yard (yes, I have permission).  I put these on top of the leaves, mostly to hold them down, but with their spiky branches and twigs pointing up, they also make great faux barbed wire.

So far, as of this morning, nobody found their way into our little garden fortress.

So that's the first half of this story...

Because I've been using newspapers from Bunny #1's cage in the buckets, the newspaper has actually been soaking up too much moisture in the bokashi bucket.  I don't think my microbes have enough water to survive and thrive.  And you can tell when they are thriving - you'll notice the lid on the bucket expanding upward.  I actually have to "burp" my buckets about every other day while they are active.

Which brings me to this tip:
If you use newspaper, like I use newspaper, add non-chlorinated water when you add your pre-made bran that you've either purchased or made yourself.  I'm going to play with a yeast/water/molasses combo that I think may work easily and cheaper than the pre-made stuff you can buy.  When I get this figured out, I'll be sure to post my results for others to try.

And here's some of what was going into them:


One bucket inherited some extra worm compost I had no home for at the moment, and another one inherited the contents of the bunny bean kettle.

And as for the weight?

I ended up with 2 buckets per month, and while I did not actually weigh the buckets with a scale, I can tell you that they each weigh about as much as a larger bag of soil.  These usually run in the 25 pound range.

And the numbers would then add up like this:


When you divide that 6-million-ish number by 22,000 pounds/garbage truck, that's a LOT of garbage trucks NOT on our roads, using huge quantities of fuel, polluting our air and causing wear and tear on our streets.  Try 279 trucks.  I told you it was a lot!

So I hope that if you haven't given this any thought yet, or are just beginning to try, you'll find these numbers and my processes so far encouraging and inspiring.  I realize that not everyone can actually do this in their own backyard, but if enough folks did, we could really start making a huge difference in the amount of trash needing to be hauled away every week and the amount of fuel needed to do so.

Think about it, and give it a try!

Presented with love by SPH at 4:20 PM